“It’s beautiful and interesting, but quite useless – that’s the point. It’s a reference to the precarious and perilous life of the creative worker.”

The realm of art and design has long been a space in which social commentary has been prevalent. It has allowed artists to creatively navigate social and political issues and has encouraged audiences to contemplate the world and their position in it. Whether it has been political issues, restriction of social identity, or growing anxieties regarding the state of our climate, artists have long been interpreters of the social consciousness. Today, how are artists and designers approaching their practices from this point of view? What does it mean to be “socially responsible”? What effects do these pieces have on their audiences? Do they provoke? Do they solidify opinions? Can they bring about social change?

This group of designers have continued the tradition of using their practice to speak to larger, social and political debates. Whether in their own country or more generally, each presents the audience with a perspective from which to consider the issue at hand – for example, sustainability, resource waste, representation of identity, or growing social disparity. In a world with many voices and much uncertainty, these designers provide a space in which viewers can consider their own perspectives and, hopefully, inspire them to bring about some form of change.

In her work, Anna Nordström fuses traditional craftsmanship with contemporary subject matter to produce textiles which reflect on the world today. Through this, she is able to provide a social commentary which is both humorous and poignant. Nordström’s body of work includes patchwork, quilting, and embroidery and make use of imagery seen in traditional media, on bookshelves, and on social media. In the case of the “Liquid Matter” quilt, the craft and techniques themselves are highlighted as well as the idea of tactility and materiality – different colours and textures are used to communicate the different types of liquids. From her own perspective, Nordström uses the quilt to ask the viewer to think of the materials they interact with and, more generally, to consider how they navigate through the world.

Flétta was founded by Icelandic designers Birta Rós Brynjólfsdóttir and Hrefna Sigurðardóttir in 2017 and, as a studio, focuses on responsible design, sustainability, and craftsmanship. Their work makes use of uncommon or unused materials and experimental techniques to produce pieces which are innovative, unique, and a basis for social commentary. Their series “Minute” reflects this practice and commentary through their take on mass production and local craft. Each candle holder was created by hand in one minute, combining the notion of individual craftsmanship with a rapid production practice. The tradition of handcrafted work is sustained despite the limited time frame and allows for a local product to be produced en masse.

Spanish designer Jorge Penadés’ design practice focuses on experimentation, innovation, and moving towards a more responsible future. With a background in experimental design and conceptual thinking, Penadés makes use of leftover leather and other discarded materials to create unique, innovative pieces. His “Structural Skin” series, including “Table Lamp Nº03”, demonstrates a technique which creates a new material from reconstituted, leftover leather scraps and extends the lifespan of the previously unused waste. In this way, Penadés takes the environmental impact of production under consideration and redefines how designers can use alternative materials to create innovative pieces.

MAYICE Studio, based in Madrid, works together with local craftsmen to create unique and eye-catching pieces with a strong focus on the process of design as well as the materials, their histories, and their functions. Founded in 2013 by Imanol Calderón Elósegui and Marta Alonso Yebra, the studio works with clients from around the world, developing a unique approach to design production and paying homage to their own national heritage. Through a collaboration with the Real Fábrica de Cristales (Royal Glass Factory) and using molds last used in the early 1900s, the “Rfc+” series has created pieces which make use of traditional techniques and, ultimately, emphasise the heritage of the factory as well as the craft of glass blowing.

Even within the wildly creative design scene of Beruit, Coco Exotico creates pieces which stand out and expertly catch the audience’s attention. Her design practice is characterised by a desire to create unexpected and experimental pieces, surprising even herself with the results. Familiar objects and materials, including antique furniture and found tree stumps, form the basis of her work, but are transformed through bold and eclectic designs. The multi-functional object “Beach Boy”, for example, combines a fun pattern with bright colours while also hinting at the idea of gender. It stands between prescribed norms, instead becoming an “unidentified” set of legs – questioning whether or not the idea is actually relevant.

With a strong focus on social engagement and sustainability, designer Sep Verboom and his label Livable (started in 2012) create projects in collaboration with local communities in the Philippines, Indonesia, and Brazil. The projects make use of both natural resources, such as rattan, as well as reclaimed waste. Verboom’s “‘Fan’ Lamp” from the 2014 initiative “Fantasized – Design for Impact” repurposes the metal frame of a fan and combines it with woven rattan to create a lamp. Through cooperation with communities in Cebu City, traditional rattan weaving techniques are combined with contemporary design, integrating different forms of knowledge and creating a piece which reinterprets waste and resources. As evidenced in his work, Verboom is passionate about using design and the larger design industry as a means for social and ecological change.

As a series, “Afropicks” approaches the notion of identity and representation and encourages the viewer to question what it means to be “Swedish”. Through his work, and with reference to his own mixed-race identity, Swedish designer Simon Skinner investigates social and cultural norms as a way to provide commentary on the concept of identity. His designs make use of everyday objects and inherent symbolism, playing with these themes to create something entirely altered and affective. In the case of “Afropicks”, each afro hair comb in the series refers to an different individual and is complemented by a statement of their own personal experience of being a black or mixed-race Swede. In combination, each comb becomes a story which speaks to and challenges the understanding of Swedish identity and design.

Launched in 2014, the Stine Linnemann Studio creates designs with a strong focus on craftsmanship, creativity, and sustainability. With an education from the Royal College of Art and experience within the larger fashion industry, Stine Linnemann works with textile design in a way which speaks both to the traditional craft as well as to contemporary design. Linnemann herself views her practice as a way to comment on social issues and, additionally, as a method to bring about social change. As part of the “Precarious Structures” sculpture series, “Precarious Portal” references the emerging social class of the precariat – a social class which is in a constant state of change and uncertainty, as reflected by the materials used for the piece. The work, specifically through its use of copper, remains in a state of constant change as the material changes colour and corrodes over time in a similar manner to the current social climate.

With an education in product design and a desire to bring about social change, Iceland-based designer-activist Björn Steinar uses his design practice to draw attention to and comment on both local and global social issues. Working within, as he describes, “an anti-capitalistic design method”, Steinar works to develop research projects and, ultimately, solutions to pressing issues such as food waste, over-consumption, and consumerism. Working both collaboratively and alone, he is able to approach his role as a designer in the contemporary world in ways which question and shift previous notions. The collaborative project “Skógarnytjar” provides a strong example of Steinar’s combined research and design approach, working directly with the Icelandic forestry sector to develop new notions around resources and, most specifically, speaking to the issue of sustainability in Iceland.

Tina Austen‘s practice makes use of experimental materials and techniques to create vibrantly coloured and intensely textured designs. At the same time, these works provide viewers with a social commentary which goes beyond their visually captivating aesthetics. In particular, Austen’s “‘On Your Plate’ – Ceramic Taste to Each His Own” series comments on the issues of food and resource waste. Despite their eye-catching qualities, upon close inspection, the different textures, colours, and forms are transformed to reflect decay and waste, speaking to her critique of society and encouraging viewers to contemplate the issues at hand. 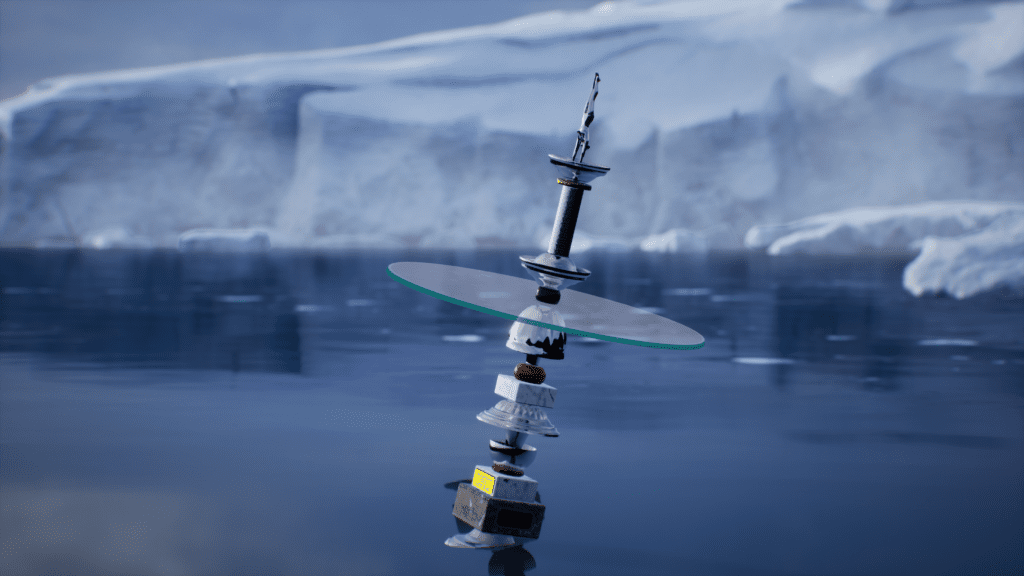 Presented in a glacier landscape, the Icelandic collection “Attunement” explores the possibilities of and connections between sustainability, technology, and humanity.

“When children and young adults feel the urge to protest and claim their right for a future we’ve got to listen and do something.” –… 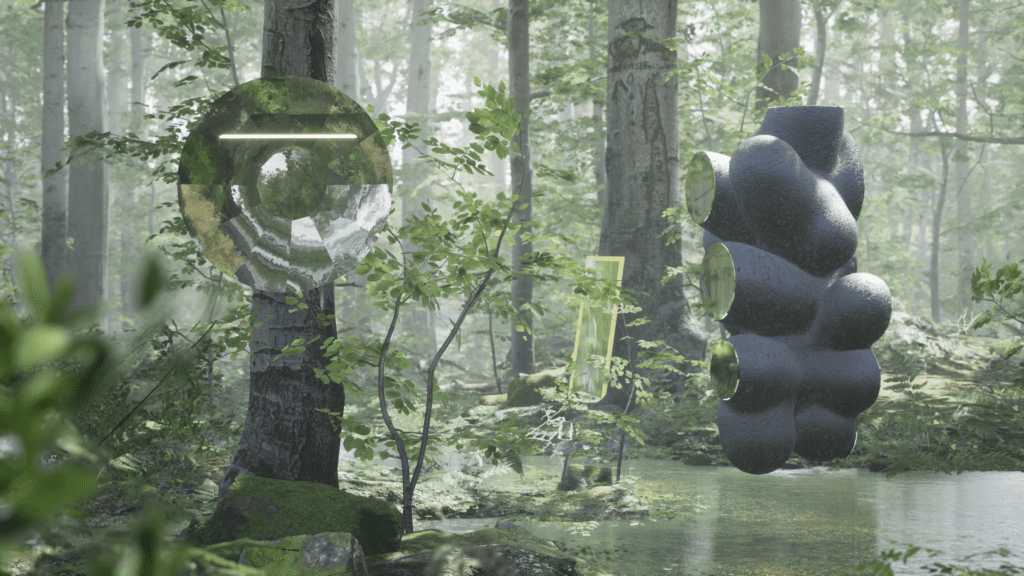 Presented deep in the Swedish forest, “Mirror Mirror Off the Wall” aims to strengthen the female gaze by giving the stage to a group of leading Swedish women designers and one male designer.