The Deserted City is a series of sculptoric constructions, in tribute to “GOG”, the book by Giovanni Papini, 1881-1956.
“No doors opened, nobody answered,no sound of steps,no dogs barking,no horses neighing, nothing broke that taciturn hallucination.” 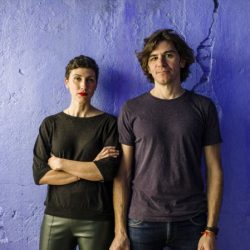 LAS ÁNIMAS is a creative studio based in Seville (Spain). Their work includes symbolic, tribal and esoteric elements, and arises from the expressive need of sharing an aesthetic universe; a dreamlike parallel world full of visions; of architectural references, both historical, fictional and coming from images underlying popular culture; hardwired to the unconscious and collective memory. Using a language of geometric and iterative patterns, they experiment with materials, shapes and textures, to develop an iconography of retro-futuristic, transgressive, ceremonial and deeply evocative aesthetics. As a result of this altered field of view where sumptuousness and magic gather, high sensory impact pieces of ceremonial character emerge. Their creative universe encompasses references as distant as Science Fiction, tribal cultures, distortion of reality, cybernetics, duality, experimental electronic music or architectural brutalism; an imaginary that links with the elements of their personal environment, readapted and projected from their very own insight. Their creative body includes pieces of furniture in limited editions, sculptures, interventions and unique objects; everything designed and created by themselves; a symbolic universe full of emotions that lead to a spiritual mood lost in time. Works conceived as totems that challenge functionality and form: latches that open secret trapdoors to higher states of consciousness, connected with mythology, ancient ceremonies, imaginary rites, sacred symbols and spirituality. Along this process, the conception, creation and evolution of each work resembles a ritual of exploration, of alchemy, of experimentation at their studio / laboratory with materials and forms until the pieces finally emerge. Their personal concerns join the influx of Seville, Andalusia and Spain; Its culture, art, folklore, technical processes and artistic tradition are present, mixed, assembled, fused in one way or another in each one of their pieces.