The Galeana Collection by Jorge Diego Etienne is made up of six objects sculpted in alabaster that speak of origin, craft processes, and materiality. It is done in collaboration with the Master Francisco Charles from Galeana, Nuevo León in Northern Mexico. The town sits 1,639m above sea level and has one of the best deposits of this variety of calcium sulfate in the world, characterized by its pure white color.

The project combines artisanal manual labor with experimentation in advanced manufacturing. Using pencil, chisel, sandpaper, and wedges, the craftsman solves proposed digital modelling and 3D prints, demonstrating his mastery over a polished technique for over five decades. Each of these stones was carefully extracted from the fields, giving them a unique and unrepeatable identity. The same hands that break the earth with the blows of a mallet, cut, define, and smooth the piece, denoting the skill and sensitivity of the craftsman to work it.

With Galeana, common objects in our daily lives are re-contextualized as functional sculptures, deconstructed to generate a language of rational forms interposed in a calculated irrational order. The detail and precision speak of the patience in each stroke of the Master who, through this collaboration, seeks to share his knowledge to motivate others to keep working with alabaster stone in Galeana. 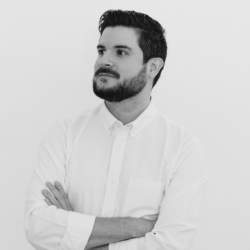 Jorge Diego Etienne is an industrial designer living and working in Monterrey, Mexico.

He founded his industrial design studio in 2012, and has worked with firms including Zavotti, Tupperware, and Coca Cola.

He is the founder and editor-in-chief of Designaholic, a design blog.

He is a co-founder of DECODE, a local design proyect that organizes an annual festival and a student exhibition.

He is a founding member of Cooperativa Panoramica, a group of young Mexican designers.

He holds a degree from Tec de Monterrey; and studied at Central Saint Martins, Domus Academy, Parsons School of Design, and the Kyoto Institute of Technology.

He is currently a teacher at Tec de Monterrey; and a speaker on design, creativity, and entrepreneurship topics.

Jorge Diego is the only Mexican designer to participate for three consecutive years (2015-2018) in Salone Satellite at the Milan Furniture Fair.

His work has been included in prestigious design exhibitions in Mexico, the Crafts and Folk Arts Museum in Los Angeles, Maison Folies Wazemmes in Lille, and featured in importan design events like ICFF in New York, Maison & Objet in Paris and the BID in Madrid.

Jorge Diego thinks of design as a strategic means to make more and better business for clients, and products that create lasting experiences for users, within a critical and global perspective: design beyond design.

Presenting “PROXIMITY”, a collection created in collaboration with Southern Sweden Design Days showcasing a selection of new work from ten designers and studios. As a whole, the collection contemplates the notion of proximity, interconnection, and belonging. Whether through contemporary references to traditional crafts techniques; the use of locally sourced materials such as wool, lichen, steel, and wood; or playful visualisations of the notion itself, the selected pieces illustrate the importance of closeness, interconnection, and kinship in uncertain times. Featuring pieces by Andrea Santivanez, Andréason & Leibel, Ebba Lindgren, Förstberg Ling, Jóna Berglind Stefánsdóttir, Lab La Bla, Lisa Darland, Louise Hederström, Moa Lönn, and Studio M. Organised by Form/Design Center in Malmö, Sweden, Southern Sweden Design Days is an annual event currently in its second edition, which highlights sustainability, collaboration, development, and innovation in design. This year’s theme, as described by the event organisers, “[reflects] on the notion of being close – the connection between people, cities, countries, species, professions, etc”. The physical exhibition of “PROXIMITY” will take place at Lokstallarna, Södra Bulltoftavägen 51, 212 22 Malmö from 19 - 22 May 2022.