He has focused his research on African architecture, particularly seen in the Sahel region. Like the Great Mosque Djingareyber in Mali, the takyenta of the Batammaribas people in Benin and Togo or the Teleuk of the Mousgoum people in Cameroon.

At the same time, he was interested in the relationship between African tribes and their motifs in daily life, like the ornamentation of houses or objects, for make-up, scarification, etc.

This research has resulted in 5 sculptures, made out of papier-mâché and illustrated through his graphic universe. The choice of papier-mâché lies in the very raw touch it presents, while being a modern production technique. The manual approach and the relationship between simplicity of execution and complexity of forms are aspects that refer to African philosophy. 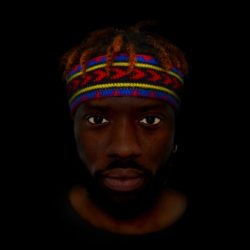 Gilles Mayk Navangi (°1990) is a painter, illustrator and sculptor. He graduated from the High School of Art and Design of Amiens (France), he has a graphic design background. His eclectic vision pushes him to express his creativity in multiple ways by approaching different supports, mediums, media ... His work focuses on the phenomenon of civilization, with a particular interest for the primordial African culture. This need to reappropriate the cultural heritage in an artistic practice is manifested through the new artistic and creative Afrodescendant generation. In his work he also proposes a graphic representation of the human body and nature and in parallel, a reflection on the patterns.