The “Boucle” Rug has been created from a series of research drawings around interlacing and loops, which are part of an essential, personal, and continuous approach of inspiration, through which Samuel draws elements that stimulate his projects. Some part of this drawings was exhibited in 2017 by The Art Design Lab gallery in the building of Christie’s Paris.

This hand tufted rug is produce in Nepal with natural wool.

The “Boucle” rug is the first of a limited edition of 12 pieces launched at the end of 2019. 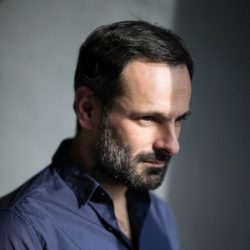 Born in Bordeaux, lives and works in Paris. Samuel worked for 10 years for prestigious design agencies in France and Italy, such as Arik Levy, Antonio Citterio, and Rodolfo Dordoni. In 2010, he launched his own studio and worked with various companies as a designer and art director. Samuel was honored in 2013 by the Grand Prix of Creation of Paris City for all his creations, as well as for his creative approach. He also received various international awards, including 3 Red Dot Design Awards and a German Design Award. In his works, he attaches particular interest to promote the know-hows, the beautiful workmanship, and the place of the human being in the project, whether it be with a craft structure or a company. Above all, Samuel sees creation as an open-plan ensemble and, thus, works in different fields of design such as furniture, industrial design, street furniture, lighting, spaces, scenography, artistic direction for a company, limited edition pieces. He also collaborates with architects on more specific projects. The expression of his creations tends towards a pure line, contemporary, elegant, and with a graphic effect sought. He has also exhibited at the Musée d\'Art Modern and at the Musée des Arts Décoratifs of Paris, at the Ceramics Museum of Vallauris, at the Triennale Design Museum of Milan and at the Holon Design Museum. In 2018, Samuel launched SB26 brand with the ironworker Bruce Cecere. They explore the limits of metal work, such as goldsmiths, and produce fine objects and lighting for interiors.

New Solid is a vision to feel and live with art. It is the first show of Casa Nueva, a livable gallery space and apartment hotel initiated by designers River Valadez and Sebastián Arroyo Hoebens, built on the idea that art can be inhabited. We invite visitors to participate in the dialogue among transdisciplinary works from the contemporary art and design scene. It concerns functional art designed and conceived by artists from two magnificent cities, Mexico City and New York, in a correlation founded in geometry, technology, and crafts. The artworks, bliss for the contemplative eye and a joy to use, will invite the beholder to examine the floating and multidimensional character of concepts such as mass, volume, or weight. The location, equipped as a functional living space, can be found in the historical center of Mexico City. The event will be part of the Design Week Mexico festivities in partnership with Adorno, acting as the international design and logistics platform, as well as Ángulo Cero, an Art Gallery with astonishing designs located in Mexico City, and with the support of Yunuen Sariego, promoter and curator of contemporary art based in Mexico City.