“The most important thing to us is to continue exploring and experimenting – when we create something, we want to ensure it’s offering something interesting, regardless of the medium.”

Looking at the objects that designer Diego Faivre and visual artist Hugo Béhérégaray have recently created, considering their individual working methods and approaches, one immediately realises why they decided to work together. The duo met in their first year at art school in Bordeaux, France and eventually dropped out together. As makers, Faivre and Béhérégaray both represent similar values when it comes to artistic creation and execution, explaining that “it’s like meeting an alternate version of yourself – same, same, but different”. Their “mutual love for accessible materials to create something new and interesting” has led to the intriguing result featured here.

After dropping out of École Supérieure des Beaux-Arts de Bordeaux, Faivre went on to study the course “Man and Leisure” at Design Academy Eindhoven in the Netherlands. His final project, for which he has received much attention, was titled “Minute Manufacture”. Each object created in this ongoing project costs exactly as much as the minutes he spends working on it – one minute equals one euro. His goal is to create transparency, especially in a world where mass production is the norm and value and labour seem to contradict each other.

Béhérégaray, on the other hand, transferred to the École nationale supérieure d’arts de Paris-Cergy to study Plastic Arts. The focus of his work was contextual art, often in the public sphere. His project “DE HUT (The Hat)”, for example, created during his residency at Art Center Abbaye de Maubuisson, is a place for people to come together in the garden. Through the materials used, the piece refers to the past and future of the place, the practices that are carried out there, and the people who animate it.

What brings them together, apart from their friendship, is the renewing and recycling of materials and objects. Faivre often uses existing pieces such as chairs, tables, and even extension cables covered with the help of his recognisable Diego Dough, giving them new colours and shapes. In the same vein, Béhérégaray often uses leftovers from other projects and frequently works with cardboard, which he deforms and shapes into three-dimensional, often abstract, colourful figures. 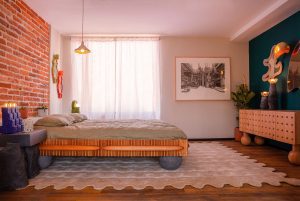 In their latest work together, Béhérégaray transforms his 2D drawings into 3D designs using cardboard to create the abstract shapes. Once formed, Faivre covers the whole thing with his Diego Dough which, on the one hand, provides stability and, on the other, produces the eye-catching, colourful designs. In the intermediate step, a lighting system is installed which gives the sculptures functionality, turning them into lamps.

Both makers follow a very hands-on approach – they enjoy experimenting and, most especially, the actual physical work. Creating something out of one’s own physical strength in the moment can foster creativity and point toward new directions in the process. Furthermore, it illuminates a distinction from mass production and emphasises the individuality of each object.

If one looks at the pieces more closely, there is almost not enough time to list what catches your eye. The abstract forms suggest, among other things, details from architecture, robotics, and, in some places, even have human or animal features to show. The colours of the Diego Dough are sometimes applied on a larger scale, following the physical contours of the piece and, in other places, they form such delicate patterns that they remind the viewer of mille-fleurs of the early Renaissance.

Despite the older and varied aesthetic references, the interplay of the predominantly cubist shapes alongside the use of bright colours show that Faivre and Béhérégaray’s collection is a product of our time – at the intersection of technology and humanity, art and consumer culture. In fact, in the simplest and most basic interpretation, we are dealing with a spectacle: a sensational display that results in curiosity and admiration. The viewer, through the visual power of what is presented, has almost no chance to avert their gaze.

French-born, Netherlands-based Diego Faivre is a recent graduate of the Design Academy Eindhoven. His graduation project, Minute Manufacture, offers complete transparency in the production and manufacturing processes of design in his work, challenging the current fabrication and evaluation of objects. For Faivre, time really is money; the number of minutes spent affects the quality and design of the outcome. It is his response to the rise of mass production and the consequential devaluation of individual expression.

Drawing from his experience as a blue-collar worker, Faivre points out that every action in a factory or similar environment is meticulously calculated, recorded and assessed, leaving no room for the human element. At the same time, his project strives to inject a sense of expression and personal identity into manufacturing.

French-Dutch and Amsterdam based Hugo Béhérégaray, is a visual artist who graduated from Ecole Nationale Supérieure des Arts de Paris Cergy and masters from the Dirty Art Department at Sandberg Institute. His various cardboard sculptures tend to insert themselves through carnavalesque ways within daily life urban situations. For Béhérégaray, productivity and scale shouldn’t be determined by economical reasons. Therefore, the use of street found materials turned into valuable and functional objects, is a way to expand the infinite universe of interactions.

From his professional experience as a garbage man, Béhérégaray often states that nothing is lost and that there is no useless waste within the creation of new shapes and powered by the use of colours.