“In a world where everything goes so fast, the general public
loses the notion of how these objects arrived to their hands.”


The word sustainability has become the hottest adjective in marketing today, but this can mean so many things, how are sure are we that a certain sustainably marketed object is really the best that we can do as conscious consumers? One more easily digestible way to view sustainability would be in terms of considering the object’s lifestyle; we can ask questions such as is it made of virgin material? What energy/resources were needed to create it? What will become of it after it has served its purpose in my life?
These next set of designers, through extensive research, experimentation and unprecedented creativity are taking these stages of our object’s lifecycles to new heights. Through repurposing waste materials, utilization of found objects and extending the lives of the objects used to make yet other objects, the clouded and illusionary concept of sustainability starts to become more and more clear.

As with his previous works, Jonas Edvard takes an unconventional material, which is rather a mixture of many materials at the end of their lifecycle: dust, in his Relic series. Through a process of trial and error, Edvard landed on a final solution, he worked on numerous test tiles and threw away the ones he was not satisfied with, one morning he saw these test tiles he had discarded in the dumpster had transformed into something he actually liked. When first created, the surface is fully pigmented in one solid color, as time passes in the curing process, due to the dust composition and pigmentation, more and more black dots appear until Edvard decides to freeze this process. Apart from these new heights reached in material innovation, Edvard matched this in material language; objects are normally dead and useless when not in their intended use, but how they can make something that can transform into something else? Adressing this, objects in the Relic collection take on various lives through their versatile function, a side table becomes a lamp, a table or chair a sculpture; objects of function just as viable for their sculptural presence.

Multidisciplinary architect and designer, Amer Madhoun‘s practice examines the constructed world and how objects of human buildings can be used to solve society’s current issues. The creations from his series Temporal Formations, probably don’t look like a common understanding of functional design, much less resemble any material you’ve seen before. Madhoud places the object’s life expectancy at the center of his investigation and the object’s deterioration became the main reason for its creation. Using sand and a two-part expandable foam, this series of furniture could be manufactured potentially anywhere and is easily decomposed to be returned back to the earth. 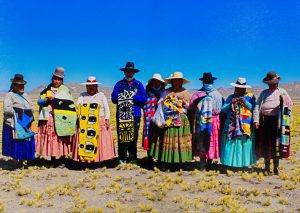 Made by Us: Sweden

In a series of sculptural totemesque works, the artist duo, Made by Us, explores primitivist themes grounded in a surprising minimalistic approach, where the process reveals just as much about their collaboration as the final result.  Therese’s background includes abstract painting and graphic design, while Oscar’s background is constituted by his experience in illustration and a figurative approach. These totemic beings are equal parts abstract and figurative, with a strong graphic presence. While their neon, metallic and fluorescent aesthetic is anything but understated, the minimalist approach comes from the material, the sculptures were created using only discarded materials collected by the artists.

As a revolt against  dogmatic hierarchy and classifications within the worlds of art and design, designer Josephine Andredottir and artist Emilie Bobek have come together to create Artsign. Josephine and Emilie reflect a growing sentiment especially amongst young artists and designers questioning the separation of these two worlds and the over-categorization of creative objects in general. Josephine and Emilie explore this middle-ground through material and process innovation. By using their differences in perspective, working style and backgrounds to their advantage they are able to see the world of objects we exist in ripped of its pre-constructed context. This outlook allows them to create new meaning and find potential in often over-looked materials, for example transforming discarded mattress foam into unrecognizable geological bodies.

Tributo was founded by Laura and Gabriela Noriega in Jalisco, Mexico in 2013, as a multidiscpilinary studio bridging the gap between contemporary design and local artisans. Inspired from Laura Noriega’s own sensorial memories, the Your Skin Chair holds memories of its own, in that the inviting Oaxacan Handwoven textile is made from recycled plastic and cotton. Noriega’s work and practice stand as a vital promotion of Mexican design across the globe, placing key importance on Mexico’s unique traditional craft techniques and local production as a means of achieving social and economic progress. The studio is committed to ecologocal well-being in thier design process by measuring thier carbon emissions and designing thier strategy to neutralize them with the aim to reduce thier environmental impact.

Designers Birta Rós Brynjólfsdóttir and Hrefna Sigurðardóttir founded Studio Flétta in 2017 but have been working together since 2014. Both with backgrounds in product design from the Iceland Academy of the Arts, they bring a high degree of conceptual and process innovation to their works using mundane or often overlooked products and materials. Their practice revolves around responsible design, utilizing reused materials and local production with an evident respect for craftsmanship and storytelling. Studio Flétta’s works include Denim on denim on denim on denim, a collaboration with fashion designer, Steinunni Eyju Halldórsdóttur and the Red Cross of Iceland to address the yearly 2000 tonnes of textiles exported by the Red Cross to be recycled, while the country imports 3800 tonnes of textile a year.

Geneva-based Argentine designer, Josefina Muñoz takes a macro perspective to the world of contemporary design and the influential sometimes seemingly distant factors that determine the industry’s course. With training in Design for Luxury and Craftsmanship, Muñoz designs with a keen sense of underlying meanings and symbolism that go hand in hand with quality. In her work for Pietretrovanti, the circular forms while embodying a soothing visual precision synonymous with Swiss design also tell the story of the circular economy. The uneven blocks of marble from which the objects have emerged has been pushed to limits to maximize the use of this material during every stage of development.

Emerging British designer, Charlotte Kidger works with a process-driven hands-on approach to materials, by investigating secondary raw materials, and industrial by-products she produces innovative sculptural pieces with a variety of functions. In her series, “Industrial Craft” Kidger has turned her attention to polyurethane foam dust that comes as a by-product from CNC fabrication companies. Highlighting the new composite material’s natural texture combined with the control of craft, this discarded material receives new life through Kidger’s practice, producing little waste and no energy to create. 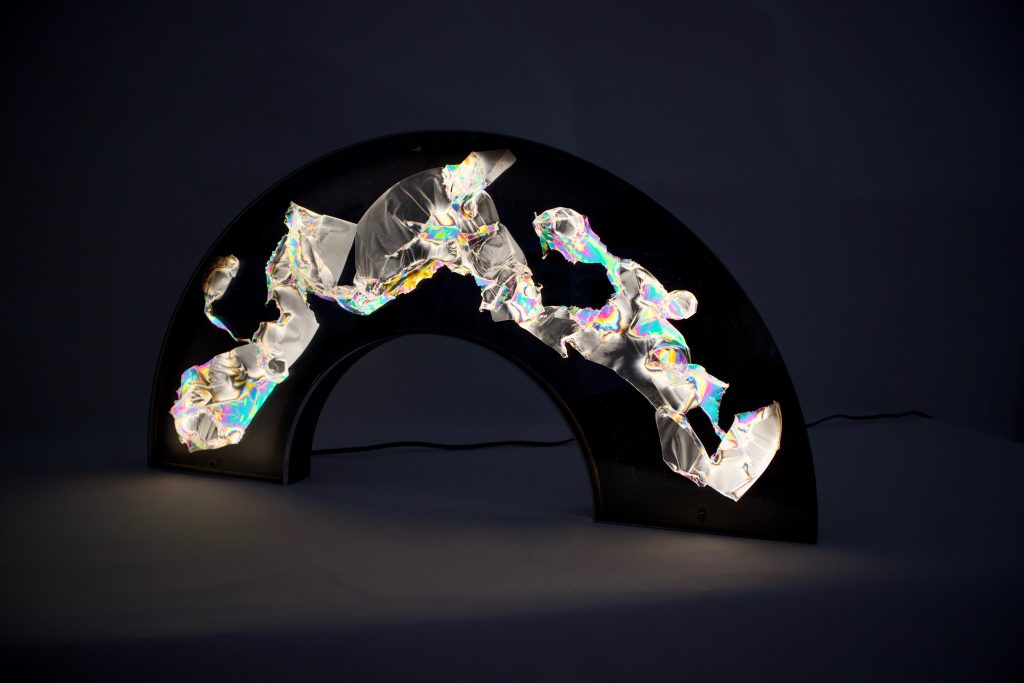 Swedish designer Kajsa Willner‘s captivating light fixtures steal the audience’s attention wherever they are shown, their dramatic iridescence and atmospheric structures bear resemblance to portals to other worlds, universes or dimensions. Understandably, viewers are perplexed by their construction method, using disposable plastic sheets combined with LED lighting and polarized filters, Willner uses otherworldly imagery to comment on the very real and current state of our own planet. As a collaboration between material scientist Dmytro Orlov from Lunds University, Willner created the series “Polarized Portraits”. Every year our earth’s oceans ends up with 8 million metric tons of plastic. Polarized Portraits mimics the function of polarized light microscopy to create an imaginative x-ray of planet earth. 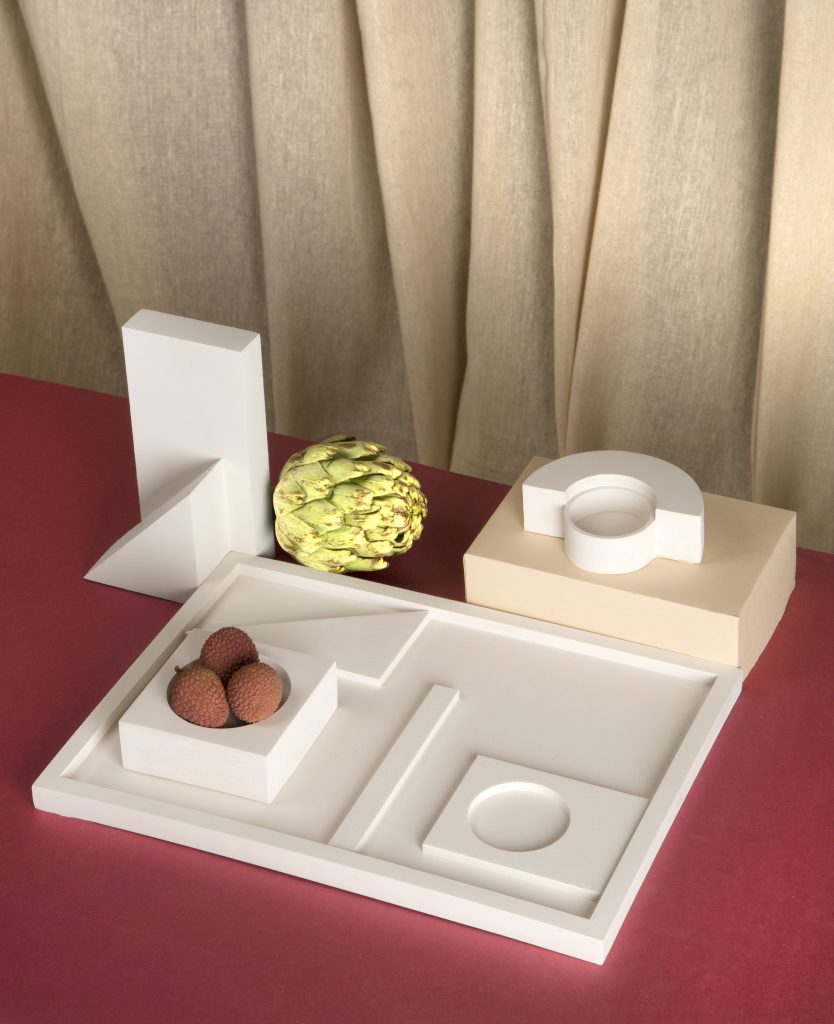 Inspired by the importance of stories in our relation to a physical and material world, Icelandic designer Theodóra Alfreðsdóttir pleads to our love of narrative in promoting a holistic and full-circle approach to sustainability and responsible consumption. Her past works have focused on giving consumers a realistic insight into the origins of their objects, from focusing all the way down to the mineral origin of our objects by investigating Feldspar, to fully utilizing the processes needed to create these objects in the first place, in her mold experiments. Many contemporary designs rely on specifc, and unique variations of form and for many objects, these are created through the use of molds. These may be used as little as one time before becoming obsolete and thrown away, Alfreðsdóttir has chosen to extend the active life of her molds by creating a series of bookends, trays, candle holders and bowls from the same origin.

Categories: Edit
Subscribe to our Editorial Newsletter and stay up to date on Contemporary Collectible Design:

“I encourage people to be curious, to focus on the moment, to react upon feelings; right now is an interesting moment” – Jonas Edvard View…

“As a designer, I seek to inspire, inform and provide a voice to artistic professions” View Josefina Muñoz’s work, Game of Stone, in the Swiss…