“UNTITLED Nº01” made out of Carrara marble. “UNTITLED Nº01” was created for the exhibition “No function – no Sense?” at DEPOT BASEL in August 2012. The inspiration came from life’s reflection and its cycle. The importance of constant movement, the energy created from it, and its ups and downs. “UNTITLED Nº01 & Nº02” are pieces to be enjoyed as such, free expression and sensitive approach, but can also serve as magazine racks. 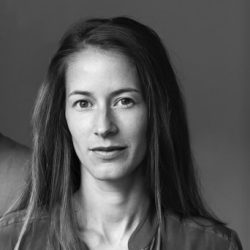 Laetitia de Allegri is a Swiss-born London-based designer, creative consultant, and colour specialist.  Her work encompasses a diversity of applications from industrial products and furniture to interior projects, both in private and public commissions. Her approach aims to balance beauty and functionality, the sculptural and the industrial, nature and sustainability, all within an overarching simplicity of form, materiality and concept.  After graduating in 2004 from Ecole cantonale d’art de Lausanne (ECAL), de Allegri worked in the Barber Osgerby studio for six years. In 2010, she struck out on her own as an independent designer, as well as a creative and color consultant, and attracted clients like Marc Newson, Tom Dixon, Alexander Taylor, Barber Osgerby, Stylus Media Group, MAP Project Office, P.Joseph, and FranklinTill. In 2014, she launched her own studio in London.  De Allegri’s collaborative partners through the years have included Eva Feldkamp and Matteo Fogale. The -ISH collection, co-created with Fogale, features furniture and objects made entirely from recycled and post-industrial materials and won a Wallpaper Design Award in 2015. The duo has also worked together on various projects for the V&A Museum, Mih Jeans, Casone, Salviati, Bloomberg, COS, Wallpaper, Airbnb, and more. De Allegri’s work can be found in the permanent collection of the Musée de design et d’arts appliqués contemporains (MUDAC) in Lausanne and has been widely exhibited at international venues like Galerie Kreo in Paris, Salone Satellite in Milan, and numerous outposts of the London Design Festival.